Years ago, the Ichthus Festival in Kentucky had a publishing component called IB Press. They published two books called Nothing But a Seed and Nothing But Dirt. Basically, these books were real people's answers to questions about the basics of Jesus and what it means to be a Christian. The third book, which was never published, was called Nothing But a Cup. I was asked to be a writer in it before the company folded. This is a response I wrote in 2007 to the question, "What is the significance of Jesus asking us to hand out a cup of water in His name?" in reference to Matthew 10:42. My response:

I was sitting in church last Sunday and the speaker was talking about the chapter in the gospels where Jesus performs the greatest miracle of all (besides the Resurrection, and this is strictly my opinion)--turning water into wine.

I know that's a taboo miracle to many churches and they find reasons to "explain" it away. My regular pastor has also spoken on this first miracle, and the more I hear about it, the more I wish Jesus could be granted a day pass from Heaven to come hang with me. I know some places he might enjoy spending a little time.

But I digress. The speaker's point on Sunday was that anyone can fill these twenty-gallon barrels (or kegs, as I'm pretty sure we call them now) with water. Those servants at that wedding did nothing miraculous. They had no special powers. Jesus told them to fill some empty barrels with some water (which, granted, probably took time and manpower, seeing as how they had no running water), and so they did. Why they followed the orders of a random stranger, I've no idea. But they did.

Water doesn't just turn into wine. Trust me; they'd have a much harder time keeping the drinking age to 21 if it did. I'm no expert, seeing as how I grew up in Southern Illinois and not California or France, but I’m pretty sure that wine takes grapes and sun and time and some process called fermentation. 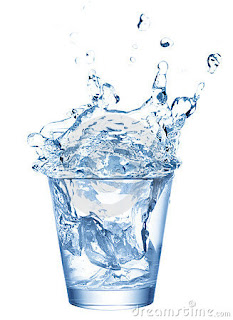 Not with Jesus. He's got these superpowers that enable him to skip a few steps in the monotonous processes in life. (If I had that, I would completely skip the "getting-ready" portion of every day; it bores me.) His divine power changed that water into wine. And not just any old wine--he made it into the "good stuff," according to some of those party guests.

When Jesus calls us, as his modern-day servants, to give out a cup of cold water to people, we're doing just that. It's nothing miraculous, at least, not on our part. But by obeying and serving that cup in His name, He is able to change that water into "the good stuff"-- the life-changing, thirst-quenching, living water of His father.