The Place We Fix Our Eyes

After having a blog for eleven years, it's about time I use it.
Writing is in me; it's who I am. And unfortunately, life has gotten in the way, and now my writing consists of 140 characters or less.

This blog is called Centered, and you may notice the web address is johnonethree. It seems only fitting that my first post describes this focus that I chose.

Chapter 1, verse 3 of the Gospel of John states, "Through him all things were made; without him nothing was made that has been made" (NIV). This follows a powerful statement about Jesus being the Word of God who was with God and was God at the beginning of creation.

I was teaching this chapter to my bible class today, and it made me recall a "God-tervention" moment that I had about four years ago.

I had just started teaching at CCA. My relationship with God was the steadiest it had been in years, but I wouldn't call it passionate. I knew God had called me to teach in a Christian school, but I felt very unqualified and inadequate, both as a teacher and as a minister. And, after having grown up in the public school system, watching my mother teach in a public school, and having just taught in a public school myself, I wasn't completely sold out to the idea of Christian education. But I was being obedient.

One day, during one of our chapel times, I was standing in the middle of a throng of students and singing a praise song. I can't remember what the song was, but it would be cool if it had been "Center" by Charlie Hall. I highly doubt that though. But there was something in the words, or maybe just in the presence of God, where I had a revelation that Jesus was THE CENTER. He wasn't a blessing byproduct of obedience; He wasn't there just when I felt like it. It was suddenly ALL about Him for me.

I drove home that day, looking at all the people in all the cars on I-70, and I felt sorry for them, because they were probably so consumed with commutes and work and family and bills and stress and worry. And they didn't need to be. Because all of those things are human-created structures to survive this world that we are only a part of because God created it and us. Did I mention that nothing matters apart from Him? 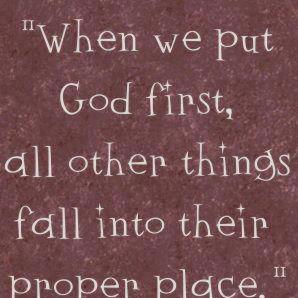 There were months after that where I didn't want to talk about anything else trivial. I only wanted to see God in every moment.

I don't still live constantly in that place of awe. I get caught up in my own worries and relationships and work and finances and family. But when I remember that day, like I did today in my bible class, I stop for a moment and praise God for breath. For life. For salvation. For grace. For a voice to share this amazing news with everyone.

Nothing else matters.
It's all about Jesus.

Can you imagine if we lived like we actually believed what we knew?