At the request of some students, I am showing the movie The Gospel of John to my Bible class. I've never seen it before, so I was excited to watch it, too. If you haven't heard of it (like I hadn't), it's a depiction of the book of John, spoken verbatim from the Good News Bible.

As I was watching well-known Scripture come to life, something struck me. (Again, it's not a new thought, but watching the action on-screen made this much for real for me.)

If Jesus wasn't who He said He was, then He was the world's creepiest man.

There are plenty of people who have uttered the words, "I don't believe Jesus was really the Son of God, but He was a good man, a good teacher." WRONG. Have you read Scripture? Jesus was either telling the truth, or He was a lying, crazy, let's-all-drink-the-koolaid psychopath.

Actually, He would have been worse than Jim Jones, because Jesus didn't tell people to drink kool aid; He told them to drink his blood. Wait...what?

Yeah. In John 6:53, Jesus says to the Jews, “I tell you the truth, unless you eat the flesh of the Son of Man and drink his blood, you have no life in you" (NIV). I gotta say, it's not a huge surprise that the Jews weren't big fans of this guy. That's a pretty intense thing to say.

We have the perspective of knowing the ending before reading the back story. We know Jesus was speaking metaphorically, and we wrap that verse up all neat and tidy by discussing the crucifixion and resurrection and communion and salvation through His blood. 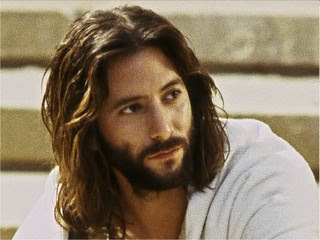 But the disciples and the Jews didn't have that knowledge. For all they knew, He was about to start tearing off his own flesh and passing it out as an hors d'oeuvre. That's weird. That's creepy. I might have left the synagogue and started rumors about Him, too.

And yet, the disciples didn't leave. They stuck around. In fact, just a few short verses later, Jesus asks Peter who Peter thinks Jesus is. His response? "You are the Holy One of God." Wow. Peter chose, despite the doubt and the fear and the "hard teachings," to believe that Jesus spoke the truth about who He was. It was crazy, it was unknown, it was a little dangerous. But he believed.

What do we believe? Is Jesus a crazed liar, or is He the Holy Son of God who deserves all our praise?