The Jesus Juke Has Messed Me Up (Sorry, Jon Acuff)

If you've been around me in the past few years, you'd know that I'm a big Jon Acuff fan. I know I mentioned him a few blogs ago when I talked about the Start Experiment. He's not just the Start and Quitter guy; he also is the genius behind the most amazing blog and book of all time: Stuff Christians Like (SCL). This book is such a great satire of Christianity by a Christian for Christians.

I first learned about SCL from Sarah Groves. She was reading excerpts of it (I specifically remember hearing about the metro-sexual worship leader) on an FMY bus ride. It was great. After that, I became a blog follower and eventually purchased the book. Although I didn't have the opportunity to hear him speak at Greenville College a few years ago, I've been actively stalking following Jon on all forms of social media. 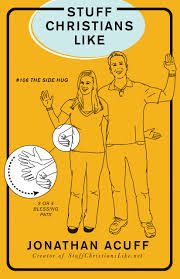 I regularly read SCL posts aloud to my students. As kids who grew up in the church and a Christian school, they can appreciate the satire. One of my favorite posts is about the Jesus Juke. You have to read the post to get the full appreciation for it, but in Jon's words, "the Jesus Juke is when someone takes what is clearly a joke filled conversation and completely reverses direction into something serious and holy."

We all know what he's talking about. We've all had it happen to us.
Example: the pastor who says to his congregation on Super Bowl Sunday, "I wish you had the passion for Jesus that you have about today's game."
Example: a student says, "I can't find my keys!" and her teacher replies, "You only need the keys to the Kingdom!"

(The top is hypothetical. The bottom really happened, and it still makes me giggle. I only wish I'd been that teacher...)

However, I'm nervous that I've gotten too sensitive to it. It's become today's snarky equivalent of the "Sunday School answer." When Dora the Explorer asks my four-year-old, "Who do we ask for help when we don't know which way to go?" I always shout, "Jesus!" And Jorie's all, "No, Mom. The talking map. Duh." And I try to turn it into some spiritual discussion about how talking maps don't really exist (except I realized they invented them in the form of the GPS, but she's four and I'm not getting quite that in depth here), but we always have Jesus and the Holy Spirit to ask when we feel lost or alone. And then she's like, "Yeah, but Dora uses a talking map." And she wins the discussion.

But even though that's a half jokey juke, it's a real lesson I want to teach my daughter. And she's too young to catch ALL the sarcasm that I have to offer, so I can still make those legitimate discussions. But what about when I'm talking to my high school classes at a Christian school? When a student asks my advice about something, if I tell them they need to seek God, they're like, "Nice Jesus Juke!" And I'm like..."but I'm serious"... and then I facepalm.

Even on the Start Experiment board (mostly Christians, fans of Acuff, people ready to change the world), I've seen lots of comments about God and someone calling it a Jesus Juke. Can we not talk about our faith issues, questions, struggles, truths, and answers without someone calling it a juke?

Let's not let truth become the Sunday School answer. Let's not let fear of the juke keep us from speaking truth.

Did I just Jesus Juke the Jesus Juke?
Posted by Megan at 10:06 PM