For the past decade, I've volunteered with the high school youth ministry that meant so much to me when I was a teenager. It's an amazing group with one of the most dedicated and godly youth pastors I've ever met. In the fourteen or so years that I've been involved in directly, the group has traveled on about five different missions trips, including four to foreign countries in central America and Europe. Under the leadership of Greg Groves, the Greenville Free Methodist Youth (FMY) has learned how to minister and care for others, especially those less fortunate.

About eight years ago, Greg taught a lot on social justice. We studied about the International Justice Mission (IJM) in particular. IJM is a human-rights agency that works to rescue people out of sex trafficking and slavery. Greg challenged the group to raise funds to send to IJM to help with a rescue. Our teens voted and decided they would raise $5000 that year. Greg was skeptical that they could; at the time, the group had about 60 regular attenders, and that seemed like a steep number for a group that size. But the kids were insistent, and Greg felt bad for trying to squelch their drive, so he let them go. Those teens amazed me. They set up a program at the high school called Loose Change to Loosen Chains (LC2LC) and placed buckets in every classroom and the lunchroom. Between that and other fundraising efforts, the FMY raised more than the $5000 they had pledged. We were pumped that our small efforts were going to help a girl in Asia make her way out of forced prostitution and be equipped to live a healthy life.

Since learning about IJM and the very real dangers of modern-day slavery and sex trafficking, I met a man who runs a Free Methodist organization called The Set Free Movement. They call themselves abolitionists who promote faith-based change locally and around the world where slavery and forced prostitution are rampant. My friend Ginger Coakley wrote a guest blog on here recently about the work that she does with Set Free.

And now, because of my involvement with the Start Experiment, I've learned about another social justice organization called Trades of Hope. Through a mutual friend, I've learned about Stephanie Erickson. She's a compassion entrepreneur (CE) for Trades of Hope, which she explains is an organization that "supports ministries worldwide who teach women in extreme poverty and/or high risk sex trafficking areas how to run a sustainable business by making handcrafted items."

Trades of Hope pays six times the amount when they purchase the handcrafted items, and they turn around and sell it here, partly to continue the business to support the artisans and partly to raise awareness about TOH and the artisans they support. You can learn more through the website: http://mytradesofhope.com/stephanieerickson70

Right now, TOH is offering a special giveaway through bloggers, and Stephanie has graciously given me the opportunity to be a part of it. The prize? A handcrafted scarf made in Nepal by local artisans who are benefiting from Trades of Hope's mission.

Want to win? Here's what you have to do: 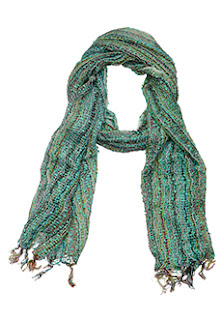 If you complete all four, your name will be entered into the drawing four times.
Best of luck to you, and thanks for supporting social justice around the world!
Posted by Megan at 9:52 PM