Usually when I dream, it’s very random. Scenes pass quickly and are very disconnected. I could be at school talking to a student, when suddenly the student changes into Justin Timberlake and we’re standing by a lake, and then a rocket is launching into the sky while giant frogs begin to attack my friends and me. I mean, nothing makes sense, it’s disjointed and awkward, and I quickly forget the details when I wake up in the morning.

But there have been a couple times in my life where I've dreamed very vividly. It’s one long running scene, I recognize the people with me, and I can remember every detail when I wake up. The first time I had a dream like that was last May.

In that dream, I was in a meeting room, when a gunman walked in and held a gun to a woman’s head. The man* next to me immediately began praying in tongues against the spirit of darkness. I joined in, and as we were praying over the gunman, the gunman began weeping. The other man and I led the gunman to the Lord, and I began prophesying that the man would have an impact in prison ministry someday.

When I woke up from this, I was shaken, but I knew that I had to write down the details as best I could. I had a strong sense that it was a prophetic dream, that there was a message in it from the Lord. I took the dream to a friend, and she interpreted it very quickly for me. The interpretations of dreams amaze me, because when they’re said, it’s like a light bulb sparks above my head. I always think, “Oh my word. That was so obvious! Why couldn't I come up with that?”

The interpretation here was that I was learning how to operate in similar spiritual giftings to the man in my dream (namely, prophecy) and boldly walking in that. It also declared that I would be effective even when I felt penned in or trapped.

Wednesday night, I had another prophetic dream. It woke me up at 2:30 and I knew that I had to write it down. I could tell it was from the Lord because when I woke up the next morning, I remembered the dream so clearly that I didn't even need to look at what I had written in the middle of the night.

In this dream, I was standing at the side of a large room, maybe a dance studio or practice room, where lots of people were dancing. A girl was standing next to me, and she was spinning some kind of voodoo magic in her hands. As we watched everyone dance, it was clear that there was a light on a woman that wasn't on everyone else. It was the Holy Spirit resting upon her. So the girl took aim and cast her magic directly at the woman. It hit her in the leg, and she fell in pain. Immediately, I ran to her and began praying against the attack. (Interestingly enough, I wasn't praying for healing.) I ran out of words very quickly because the demonic presence was so strong. It was difficult to even think as I was praying. So I started praying in tongues, over and over, and soon everyone in the room gathered around, on their knees, and they started praying in tongues. The woman rose up, completely healed, and the attack was gone. The girl with the spell was gone, and everyone was safe. Another woman walked up, and she told us that she had never experienced speaking in tongues or warfare before, but she had been feeling like she was supposed to be connected to God somehow, and this experience sealed that for her. 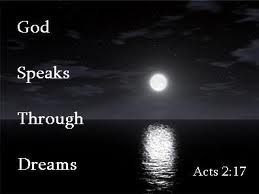 This interpretation was much more personal to both the woman in the dream who was attacked and to me, so I won’t share all the details. But it showed me that I am supposed to be interceding more, and that if an attack comes, God will give me the discernment to know what to pray. It also was a confirmation that signs and wonders are for nonbelievers, and that I/we need to be walking more fully in the power and presence of God.

I guess I want to cap this by saying I am completely overwhelmed with my God. This God, who created the galaxies, earth, and every person who’s ever been conceived, loves His individual children enough to speak to them through dreams. He loves me enough to wake me up with a message. Both of these dreams, though they weren't pleasant in the moment, served to encourage and inspire me to seek after the Lord even more. God loves His people, and He will be glorified. I am honored that He chooses to give me tiny glimpses of those truths as I sleep.

*I know who the people were in my dreams (with the exception of the "bad guys"), but I don't want to share those here.
Posted by Megan at 8:29 PM