I read 159 books this year. I meant to surpass my 2016 number of 161, but I discovered Grey's Anatomy over Christmas Break and now I forget how to read. 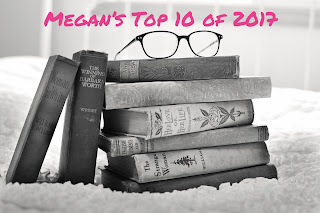 I also fasted reading (who is told to fast reading? Most people have reading as part of their resolutions) for a part of September and October. Because let's be honest--my original goal was 200. And that would probably have been excessive.

10. Talking as Fast as I Can by Lauren Graham

Who doesn't love Lauren Graham? (Look up her interviews on Ellen. She's hysterical!) I loved reading this memoir of her life that included a lot of inside look at Gilmore Girls.

9. The Voice in the Wind (trilogy) by Francine Rivers

To be fair, this wasn't a new read. I read it in college. But it had been so long that I literally remembered zero plot or characters, so it felt like a new read. And like every Rivers book, this was a graphic, intense read! It's set in first century Rome and is about Christian martyrs and Roman hedonism.

8. How to Disappear by Sharon Huss Roat

I read a ton of YA lit this year. I have to say, I don't care for much of it anymore. It's getting edgy for the sake of edgy, and there's almost no redemption. This one, though, struck me differently. I can't remember if there was language, so be careful before you hand it to your teenager. It's a novel that explores the lure of social media and the emotional impact it can have (bad and good) for today's average teen.

I liked this four-book series. It started me on a wave of Christian murder mysteries (which seems like a strange genre). Though that genre is fairly formulaic, this series had characters I cared about and plots that kept me interested.

Rebecca Stead writes middle-grade novels. One of her books has made a list of mine previously; I almost threw another she wrote (Goodbye Stranger) into this top 10. First Light is more fantasy in nature, though it's realistic enough to be believable. Stead creates an under-ice world and contrasts it to the aboveground reality in a beautiful way.

If only this book hadn't had the F bomb, I would have been truly captivated. It had twists and turns, colorful characters, and suspense that made me fly through. It wasn't scary, exactly, but I didn't want to read it at night alone!

This had all the makings to be one of my favorite reads from the start. Middle-grade novel? Check. Set in World War II? Check. This book explored one of the littler-known populations of WWII, the non-Jewish Polish children who were forced into labor for the Germans. Captivating!

3. The Sound of Gravel by Ruth Wariner

Last year, I had The Polygamist's Daughter by Anna LeBaron on my list. This book is a memoir written by LeBaron's cousin. Wariner grew up under similar conditions to LeBaron, but the way her life unfolded is very different. If anything, Wariner's story is more difficult to read. Her childhood was full of tragedy, and yet somehow, there was always love.

2. The Seven Husbands of Evelyn Hugo by Taylor Jenkins Reid

I'm almost embarrassed to have this on my list. But it was SO well-written! I honestly didn't see ahead of time how it would all play out. It was a fascinating look on old-time Hollywood, as well. I read several of Reid's novels this year, and most of them would have ended up on this list were it not for my strict one-book-per-author rule.

Only the second non-fiction book on the list, and it was good enough to claim the number one spot. Brestin explores the underlying motives we all use to walk through our worlds, and she lays out the biblical truth about each one. If you're looking to grow spiritually this year, I can't recommend this book enough.

GUYS. My first novel was published this year. I DON'T EVEN CARE THAT I WROTE IT. IT IS GOING ON MY LIST. So there. (Don't search Amazon for Megan Hall. Let's just say there's another author with my name and we write VERY different books.)

Catch Somewhere is a Christian YA novel about Kinsley, who struggles with her self-worth, identity, and addiction before finding redemption in Christ. Probably you should read it. And buy it. Whatever it doesn't matter to me oh wait HERE'S THE LINK.

What was the best book YOU read this year?
Posted by Megan at 1:09 PM