On Friday, April 12, Jorie and I were headed home from school. We decided to stop by Wal-Mart to get supplies for a GNI (girls' night in), like cookie dough, pizza, and a Barbie DVD. And also...a pregnancy test. Now, since I've been married, I've had a weird fascination with pregnancy tests. I can't tell you how many I've purchased over the years, even when I was pretty dang sure it wasn't even possible. But I have an app on my iPhone that tracks certain female things, and if it even seemed like I was perhaps a day off, then I was off to the drugstore. Generally, buying one ensured that certain things would occur the next day, so often I bought it to trick Mother Nature. (Is this too much information for my male reader(s)? I apologize, but get used to it.) 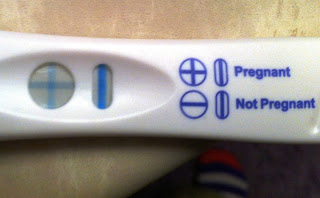 Imagine my surprise then, when out of the hundreds of pregnancy tests I've taken (perhaps more like dozens), the one on April 12 turned out to be...positive. Like, without any doubt in the world positive. We tried for Jorie, and the first test I took with her was so faint that I had to take four more over the next week just so I was convinced. Not this time around. This one was screaming, "Hey! There's a kid in your belly! SURPRISE!"

Backstory: I had a not-great pregnancy with Jorie, and since it was coupled with the world's most unbelievable labor and delivery that I have since tried to block from my mind (keywords: back labor, power outage, squirrel, failed epidural, emergency c-section), I had pretty much unofficially decided that one child was just perfect, thanks.

Flash forward to April 12. Omg. I'm pregnant. As the shock rolled in, I knew I needed to talk about this. Slight problem: Ronnie was with my brothers and sisters-in-law at the Cardinals game, and there was no way he would be able to have this conversation in front of them. But since I owed it to him to be the first to know, we had the world's most stealth and awkward phone call.
Me: Don't react. Don't say anything.
Ronnie: Got it.
Me: I, on a whim, took a pregnancy test. It's positive.
Ronnie: Okay, thanks for letting me know. Talk to you later.

To his credit, he didn't even blink at the news. My brothers never suspected a thing. But five seconds later, I did receive a text that simply said, "WOW!" He was surprised but very excited.

I, on the other hand, was not so excited. I mean, there's always the initial excitement of oh my gosh, there's a baby growing inside me. I get to pick out names. I love that new baby smell. But most of those thoughts were replaced quickly with oh my gosh, we live in a two bedroom house. I work full-time. I have a five-year-old. Babies take diapers and bottles and sleepless nights. And these thoughts were not-so-fleeting. In fact, they were constantly in my head for several weeks. While I wasn't at the point of wishing for a miscarriage (this is my child, after all), I wasn't yet ready to face the reality of a new person in my house.

But all that changed one night when I was reading Face to Face with God by Bill Johnson. There is a section devoted to John the Baptist, and in this section, Johnson was discussing John's life while still in his mother's womb. If you'll remember the story, John's father did not believe when the angel spoke of John's impending birth. Because of his unbelief, the father was rendered mute for several months while John was still a bun in Elizabeth's oven. Johnson argued that one of the reasons Zacharias wasn't allowed to speak was so his words couldn't disagree with God's will on baby John's life.

He goes on to say that Elizabeth hid her pregnancy for the first few months in order to protect John from the careless words of others. Obviously, our words have effect. Can they thwart the will of God? I'm not sure we'll ever know the real answer to that question. But why are we warned so much in the book of James about the power of our tongues if there weren't damages caused by our words?

The greeting from Mary to Elizabeth caused John to leap in his mother's womb. Obviously, the words in that greeting had the power to reach the unborn baby and fill him with joy. Why would speaking negatively not affect the unborn baby in the opposite way? Johnson writes, "In the story of John's birth we see a powerful illustration of partnering with the Lord in speech and action in order to steward the call of God on his life."

Wow. Just, wow. What was I speaking over my unborn baby? Fears, anxieties, worries, concerns, sprinkled with the occasional drop of excitement. How was this possibly stewarding the call of God on my child's life? It wasn't. That was a huge moment of conviction and repentance for me.

I'm not sure why God chose this timing to give my family a new child. I'm not sure that I'm worthy to parent another beautiful person. But I do know that I am now rejoicing over this development and speaking life over my unborn baby.

I choose to use my words and actions to partner with the Lord in this endeavor.