I spent this past Friday night at a camp way out in the boonies of Waterloo with the Son Life youth group. Except for accidentally staying too late and spending the night on the world's most uncomfortable mattress, it was a great night.

Aaron gave the message after a fantastic time of worship with one of the Greenville College touring teams. The theme for the weekend was Rise Up, and it had a superhero focus. (Sidenote: I have a messy house, lunch in the oven, a Barbie Fairytopia movie playing, and Jorie jumping around. This could be a VERY random and not well-written blog post ) Anyway, I jotted down a few lines that Aaron said that stuck with me. God was definitely getting my attention through this night. 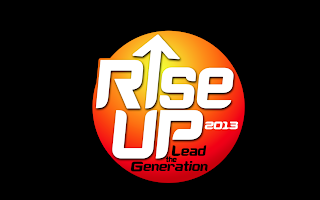 The first was when Aaron was talking about Superman and how he couldn't save his parents. Superman "had all the power; he just didn't have the discipline to know what to do with it." Last year, during what I've called the "year of fire," I felt like I (along with several of my discipleship girls) had been given a lot of "power." In other words, the Holy Spirit showed up among us and manifested quite frequently in different scenarios. Unfortunately, we lacked the discipline to always know what to do with it. And now, even though that same Spirit still lives inside us, the power is happening less frequently because of my own lack of personal devotion time with my Jesus. That was a convicting, yet hopeful statement for me to hear.

To go along with it, Aaron made the statement that "God doesn't allow you to stay content." I'm definitely in a place of contentment right now. When last year's fire dwindled this past summer, it led me into an autumn of personal turmoil. I hit bottom, emotionally and spiritually, several times as God used a friend to help counsel me through some of my past wounds and hurts. It was difficult, it was painful, and I felt like I was drowning through much of it. However, it was also a time of growth and rising from the ashes. Since Christmas, I've felt peace and rest in many of those areas.

So now is the season for me to "press in" once again (as much as I hate that phrase, I am starting to understand its meaning, and it's exactly what I should be doing). I want to begin pursuing my relationship with Jesus more than I have before. I want to learn more about His love and begin to love Him more than I have.

And finally, Aaron talked about how each of us has a calling that God has placed on our lives and on our futures. He used a personal story to explain that sometimes, our calling comes directly from God and doesn't have to be placed on us through a word of prophecy from someone else. And I felt the confirmation, more than I have in years, that my calling right now is to teach and minister at CCA. In August of 2009, when I asked God if I should take the job that I was offered, His response was, "To this you were called." Nothing could have been clearer. And though the last four years haven't been the easiest, each season is shaping me into fulfilling that calling placed on my life. Since that time, I've also been given the word that I have the mantle of revivalist (in fact, I think Aaron spoke that word over me at a CCA chapel). I don't take either of those callings lightly, but I haven't been pursuing them with the passion that I should.

After those words of conviction and inspiration, we went back into a time of worship. As we were singing and praising, Deedra offered an altar call for the spirit of the martyr, that the students would be willing to lay down their reputations, relationships, and possibly their lives to pursue His presence and to put more weight on the eternal than on the temporary. Every student knelt at the altar while we prayed over them. As we laid hands on them, Deedra prayed out that their voices would be, in her own words, "eternal echoes that resound in the heavenly places, where we're aware of the cloud of witnesses and the angels that surround His throne."

As she prayed that, her voice began to literally echo. I don't mean normal microphone reverb; I mean her voice echoed supernaturally, and I "saw" it bounce through halls and cavernous spaces, off of pillars and through great big rooms. When I told her about that, she said that she had heard it too. She later told me that she felt an angelic presence all around as we were worshiping. I believe it.

More things happened. More than I could write, and my words wouldn't do them justice anyway.

As an English teacher, I know I need to wrap this in a tidy conclusion, but I don't have a great one. So I'm going to end with this statement: I choose to lay down everything that I hold close to pursue God and the calling that He's placed on my life with a passion I've never felt before.

You are my cloud of witnesses.